Tomb of Minh Mang Hue is considered as one of the three most famous mausoleum areas in the complex of Hue ancient capital which is loved by many tourists because of its beautiful architecture in the middle of harmonious natural scenery.

Hue is famous for being the land of ancient architecture in harmony with the beauty of famous landscapes such as Dai Noi – Hue Imperial City , Hon Chen Palace, Thien Mu Pagoda, … Mention Hue also It is impossible to ignore the population of the famous Nguyen dynasty imperial mausoleums that everyone who travels to Hue must check in. Because these works are not only imprinted with historical culture, a famous tourist destination but also the pride of the people of Ngu mountain of Huong river. In Vietnamese history, the Nguyen Dynasty had a total of 13 kings, but only 7 tombs were completely built. All these works are imprinted with unique architecture and carefully preserved and preserved to this day. In which, Gia Long mausoleum, Tu Duc tomb, Minh Mang mausoleum and Khai Dinh mausoleum are the 4 most beautiful tombs of Hue . One of the four most beautiful tombs of Hue. Photo: vntrip

Walking around the mausoleums in dreamy Hue, you will discover that each mausoleum will have a unique color and beauty associated with a very different architectural style. If the ancient Gia Long mausoleum, Khai Dinh mausoleum strongly impresses on the uniqueness because it shows the intersection of East – West, the poetic Tu Duc tomb with the charming mountain and mountain position makes the mind stand out. The poetic soul of the king, Minh Mang King’s mausoleum is the most majestic and magnificent work, preserving the traditional beauty of Confucianism. 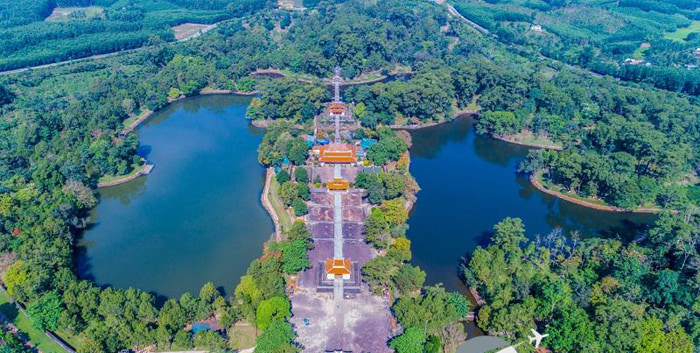 The building is the “resting place” of King Minh Mang, also known as Hieu Lang and is located on Cam Khe mountain near Bang Lang junction. It can be said that this is an extremely expensive location. And indeed to choose this place, the king took 14 years to find. The place where the mausoleum was built is the intersection point of the two streams Huu Trach and Ta Trach forming the main stream of the Perfume River. Hieu Lang is located about 14km from the center of Hue city. Today, the mausoleum’s location is near Highway 49, Huong Tho District, Hue City, Thua Thien Hue Province. 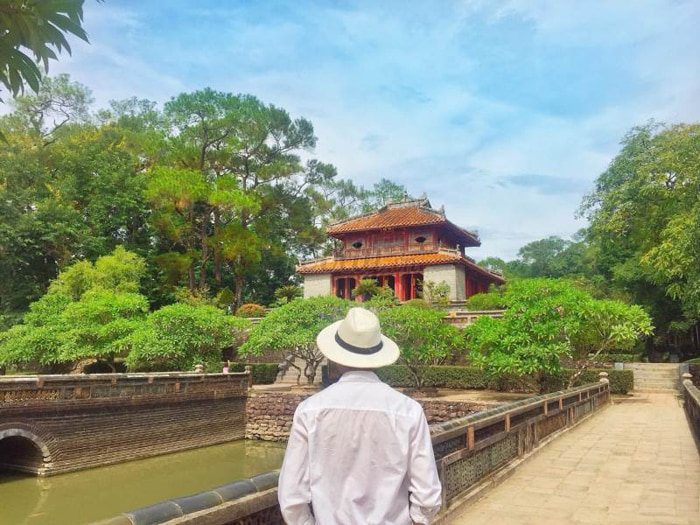 The mausoleum is located in an extremely expensive position. Photo: Ninh Bui

Compared with Gia Long Tomb and Khai Dinh Tomb , the Minh Mang tomb located near the center more, only about 12km from Hue City. To reach this historic place, you can travel by motorbike or car. The itinerary is as follows: you start from Huyen Tran Cong Chua street, pass Minh Mang street, then turn to Tuan bridge to reach Highway 49. Continuing to run straight along this road, you will reach Hieu Tomb – the resting place of the king Minh Mang.

In addition, visitors can also go to Minh Mang mausoleum by taking a boat on the Perfume River. This is also an attractive Hue travel experience when you are sitting on a boat and down the romantic river, enjoying the beautiful scenery of Hue nature. Tickets to visit when entering the mausoleum of Minh Mang King are as follows:

Emperor Minh Mang’s mausoleum is also known as Hieu Lang. This is the resting place of the second king under the Nguyen Dynasty – King Minh Mang. His real name is Nguyen Phuc Dam – the second son of King Gia Long (the king inaugurated the Nguyen Dynasty). From the time of his enthronement to his death, King Minh Mang made contributions to the country and was regarded by historians as the most outstanding king among the kings of the Nguyen Dynasty, although there are still some mistakes and limited in foreign affairs. 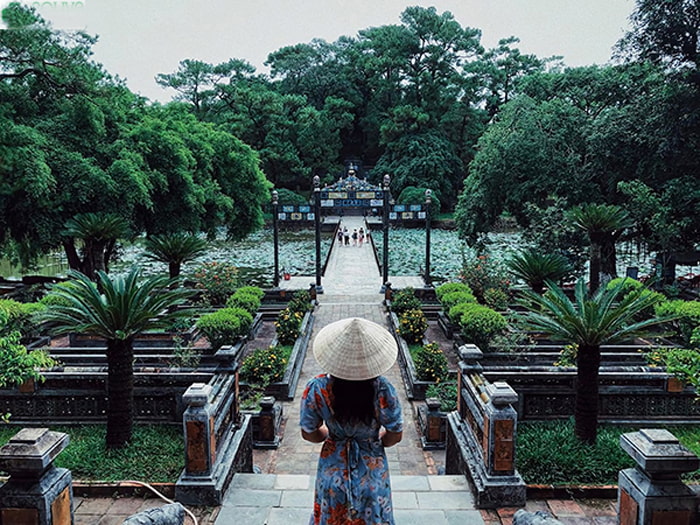 After ascending the throne and in office for 7 years, the king started planning to build his tomb. This is a time consuming process as it has to be carefully selected. The king’s tomb is not only a place of incense when the king dies, but also serves as a resting place after tense tidal hours when the king is alive. Through 14 years of long searching, Cam Khe mountain was chosen to build a mausoleum. This is located near Bang Lang junction, where the two rivers Ta Trach and Huu Trach confluence to form the poetic Huong River of the ancient capital. At the same time, the king changed the name of the mountain to Hieu Son and named his tomb Hieu Lang. 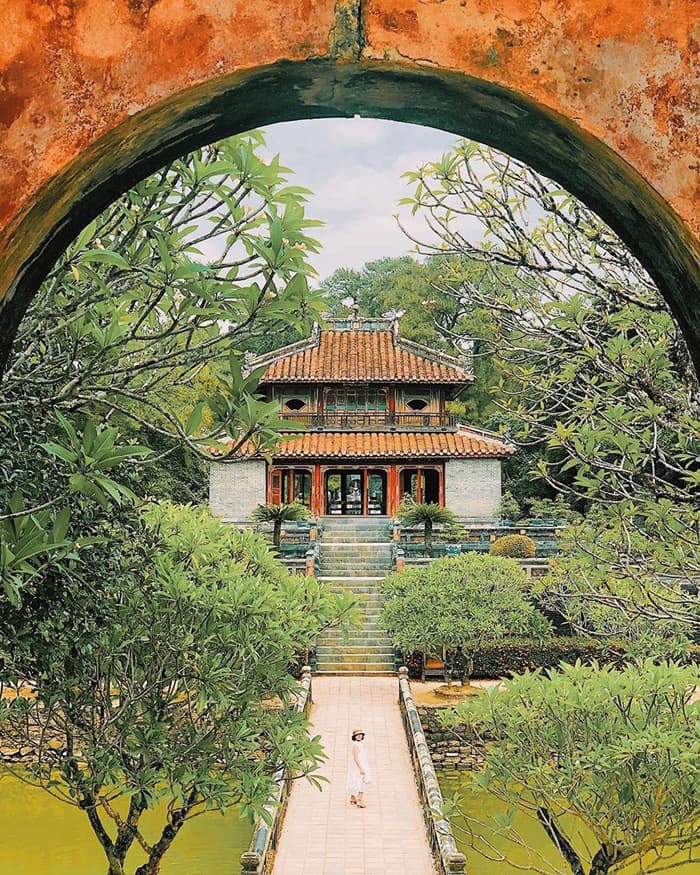 Hieu Lang is a harmonious combination between architecture and nature. Photo: @ zinnie.nguyen

Tomb of Minh Mang was built by the king in 1840 and took 3 years to complete. This majestic and majestic work had to mobilize up to 13,000 workers and soldiers to build. But the king was not yet finished building, he passed away in 1841.

After King Thieu Tri ascended the throne, he continued to complete the work of his father. In 1841, the remains of King Minh Mang was buried in Buu Thanh, but two years later, it meant that until 1843, the mausoleum was officially completed. Hieu Lang is a mausoleum built meticulously with nearly 40 large and small works, located on a mountainous area surrounded by rivers and lakes. The mausoleum has an imposing and majestic appearance but still retains the harmony between the architectural works and the surrounding natural landscape.

Hieu Lang of Minh Mang King is one of the most majestic and standard tombs in the ancient architecture of the Nguyen Dynasty. The entire mausoleum has an area of ​​up to 1,750m and is arranged symmetrically to create a beautiful architectural complex. 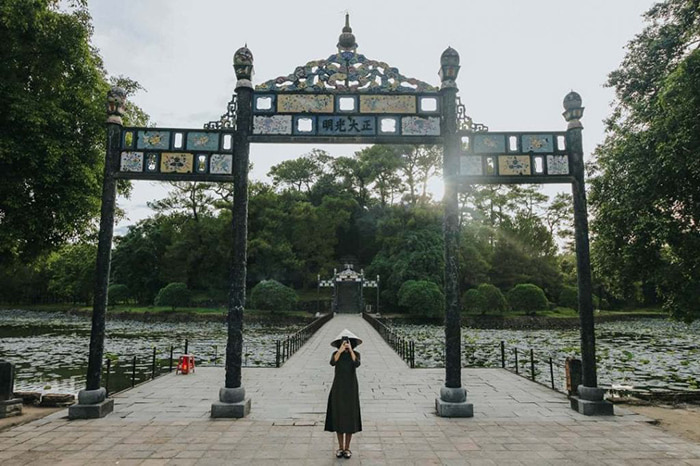 Emperor Minh Mang’s mausoleum has an architecture that follows a balanced and symmetrical layout.

If you have the opportunity to travel to Hue , visit the mausoleum of Minh Mang King , with a panoramic view from above, you will realize the shape of the mausoleum is like a natural resting person and comfortably retains the romantic scene with the head towards Kim Phung mountain, two sides are on both sides of Trung Minh lake in Hieu Lang, and two feet are placed on the river junction.

Tomb of Minh Mang has about 40 large and small projects in total. Each area is solidly built but still meticulous and eye-catching. The unique thing is that all the works are arranged equally on a single vertical axis, extending from Dai Hong Mon to the foot of La Thanh wall behind the king’s tomb. 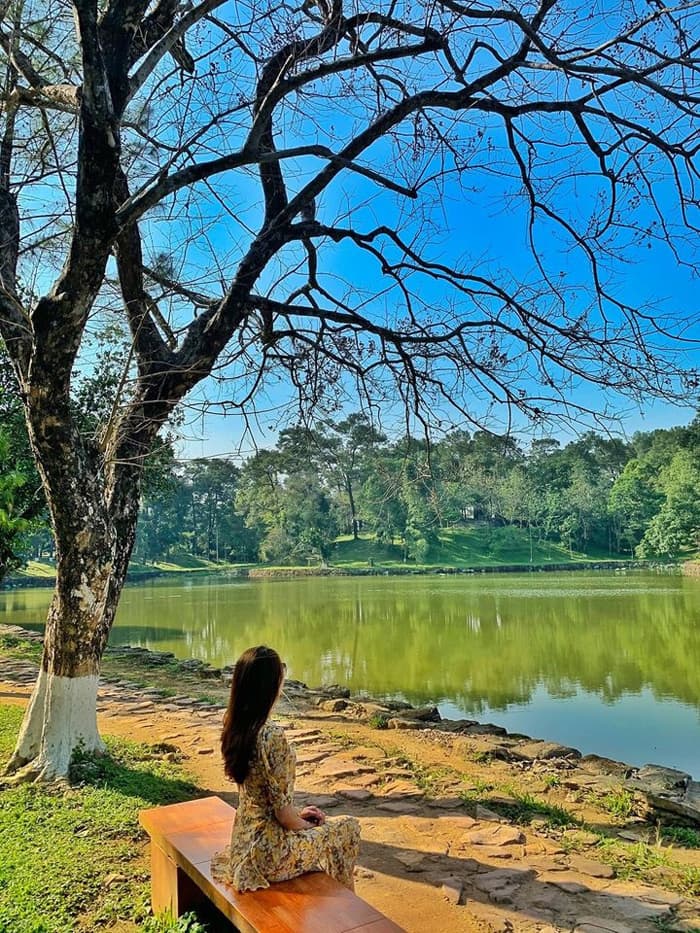 It can be said that among the works and tourist attractions of Hue , Hieu Tomb has the most symmetrical structure, following 3 parallel axes. First, from the gate to the inside, visitors will immediately see a lotus pond with a sweet fragrance. The image of lotus flowers depicts a rustic, idyllic beauty that is close and dear. This is an indispensable symbol when people mention the decorative features in the mausoleum in Vietnam.

Having the opportunity to travel to Hue dreamy, remember to go to the mausoleum of Minh Mang King to admire the most majestic and majestic mausoleum architecture with your own eyes. Because it is not too far from the city center, after visiting the mausoleum, visitors can continue to worship, pray for peace at Thien Mu pagoda, enjoy the scenery on Vong Canh hill or take a leisurely walk to admire the scenery and take pictures photo on Truong Tien bridge, the famous six or twelve spans of the ancient capital. Do not forget to take a lot of beautiful photos to record your journey to this romantic land located by the Perfume River. Wish you have a very happy and enjoyable trip!

Be ecstatic with winter beauty in Switzerland